The prevention aspect of the “4 P’s” dates back as early as 1904, where it was originally used to help prevent white slave traffic. Today, trafficking has taken a different meaning and claims many new victims every day. Prevention begins with awareness, especially awareness of the public eye, where small warning signs and red flags could save a life. As trafficking is evolving every day, the public needs to be aware of these signs and know the proper response to take. Governments as well, emphasizing the developing world, need to take action in enforcing common laws where the exploitation of migrant workers is rather simple to traffickers who are not being regulated properly. “People are bought and sold as commodities within and across borders to satisfy demand from buyers. Poverty, unemployment, lack of opportunity, social upheaval, and political instability facilitate traffickers’ ability to recruit victims, but they do not in themselves cause trafficking. The economic reality is that human trafficking is driven by profits.” As stated in the Trafficking in Persons Report, it is necessary for governments to take control and review many aspects of their supply and demand chain, one in which could greatly weaken a trafficker’s means of supply.
Prosecution of human trafficking has been steadily rising since 2008, but unfortunately “the number of prosecutions is far outweighed by the number of arrests and investigations. And successful prosecutions of sex trafficking offenses far outnumber successful forced labor prosecutions.” Good reason for this difficulty in proving labor trafficking is because the trafficking is often done by a respected/accomplished member of society. Despite this obstacle, countries have had an increasing number of prosecutions and convictions due greatly in part to the ongoing trainings of law enforcement, community outreach, and a greater knowledge of human trafficking evolving in society. Another key role in the prosecution process is engaging in careful interviewing strategies, strategies in which trust is gained and victims become empowered. An obstacle that has set forth in attempted prosecution, victims are made out to be the criminals, often times getting blamed for being trafficked. This is due to a lack of understanding and knowledge, and something that can make a whole prosecution fall apart.
Protection is a crucial component for anti-trafficking efforts in any country/government. It is proven to help in identification and prosecuting of traffickers, and in proactive victim identification. Having government and law enforcement proactive throughout the community has also proven to be successful in cases such as “prostitution markets, targeting of workplaces where labor offenses have been persistent, and regular inspection of businesses that get many of their workers on guestworker visas. The ability of governments to work with victims in making them feel secure can greatly assist in the identification and prosecution of their traffickers.
Partnership is often looked at as being between governments or some outside actors. The Trafficking in Persons Report states that the most effective anti-trafficking partnerships are within governments. With such an array of victims and experiences, a government must be able to coexist in assisting these victims. Federal governments and local law enforcements must all work responsibly and effectively together, making sure needs are met. NGO’s are also a significant factor in ensuring victim recovery, organizations which do indeed need federal funding in order to continue on their positive path. NGO’s contribute in ways such as referrals, feedback, and valuable information used to get victims on the right track and traffickers put to justice.

Within the anti-trafficking movement, visual aids and images can function as powerful tools in that they attract public attention, elicit emotion, and hopefully, increase awareness regarding the global and pervasive nature of modern day slavery. However, in order to increase awareness effectively, it is imperative that said images accurately reflect the problem of human trafficking and maintain sensitivity with regard to the experiences of survivors. Images that employ sexism, racism, and exploitation perpetuate false assumptions about human trafficking. In turn, these assumptions contribute to the development of a public misunderstanding, which is destructive in the process of increasing awareness regarding modern day slavery. 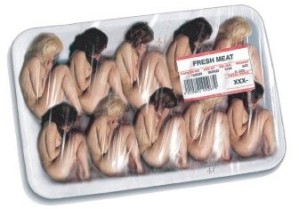 To begin, the example image above is intended to imply that human trafficking denies personal agency to women and effectively, denigrates their status to something more similar to animal, than person. However, only women are shown in this image, which is an untrue explication of the problem of human trafficking. According to the U.S. Bureau of Justice Statistics, federal investigations confirmed 63 instances of labor trafficking in 2011. Of those 63 cases, 68% of survivors were female and 32% were male. An image like the example thus perpetuates the myth that only women are affected by human trafficking, effectively ignoring the male victims, and subsequently, presents a false image of this issue to the public.
Further, in continuance with an examination of the example image, all of the women in the image are white. Statistics regarding the most recent information on federal investigations indicate that the majority of sex trafficking survivors recovered were of African-American descent, while the majority of labor trafficking survivors recovered were of Hispanic origin. This information is in complete contradiction with the ideas this example image suggests to the public. Perpetuating inaccurate information regarding the race/ethnic background of survivors not only presents a false picture of modern day slavery, and thus, misleads the public, it is also deeply insensitive with regard to survivors.
While the use of imagery in the anti-trafficking movement is a useful tactic to inspire the public and increase awareness, a lack of caution and sensitivity in the selection of these images can be highly problematic. It is crucial to the success of the anti-trafficking movement that true data and ideas are communicated to the public, not only for the validity of the movement, but to be respectful and honor the survivors of human trafficking.