The US is a Tier 1 country in the 2014 TIP report. This means that the government fully complies with Trafficking Victims Protection Act’s (TVPA) minimum standards. While Tier 1 is the highest ranking it does not mean that trafficking is not a problem in that country or that enough is being done, it means that the country has addressed the problem and is meeting TVPA minimum standards to address and eradicate trafficking.
Both US citizens and foreign nationals can be subjected to sex trafficking and forced labor. Trafficking can occur in legal and illicit markets such as brothels, strip clubs, hospitality, elderly care etc. Victims may have entered the country with or without legal status sometimes through visa programs for temporary workers. The top countries of origin of federally identified victims in fiscal year (FY) 2013 were the United States, Mexico, the Philippines, Thailand, Honduras, Guatemala, India, and El Salvador.
Federal law enforcement has prosecuted more cases this reporting period than the last. Prosecutions have also increased in the state level and all US states and territories have enacted anti-trafficking laws. The government is providing more comprehensive victims services, including a pathway to citizenship and decreased processing time for visas. Some challenges that still remain are NGOs critical need for funding and that some trafficking victims are being prosecuted and treated as criminals.
To increase its efforts the US should increase screening to identify trafficked victims, increase funding to relevant agencies, increase focus on labor trafficking, and increase training on indicators of human trafficking and the victim-centered approach.

Prosecution
In the 2013 Fiscal Year (FY), there was a reported opening of 1,025 investigations possibly involving human trafficking, an increase from 894 in FY 2012. During FY 2013, The Department of Justice convicted a total of 174 traffickers in cases involving forced labor, sex trafficking of adults, and sex trafficking of children, compared to 138 such convictions obtained in FY 2012. These totals do not include child sex trafficking cases brought under non-trafficking statutes. Notable prosecutions in the reporting period involved defendants, who lured adults and children through false promises, advertised the victims online, inflicted beatings, and threatened the victims with guns to compel them into commercial sex and/or forced labor. An increase in the number of state prosecutions has also occurred with over 100 prosecuted cases at the state level. Traffickers now also face longer prison sentences.

Protection
The federal government released a strategic action plan on victim services in the United States, which includes formal procedures to guide officials in victim identification and referral to service providers. Federal funding for victim assistance generally increased during the reporting period and was provided primarily by the Department of Health and Human Services’ (HHS) and the Office of Refugee Resettlement (ORR). HHS supported 138 NGO service providers across the country that provided trafficking victim assistance to a total of 915 individual clients and family members, a 20 percent increase compared to the prior fiscal year.
The United States provides trafficking-specific immigration relief to foreign trafficking victims in two ways: short-term Continued Presence and longer-term “T nonimmigrant status” (commonly referred to as the T visa). Both statuses confer the right to legally work in the United States. Victims with T visas may be eligible to apply for permanent resident status and eventually may be eligible for citizenship. More T visas were issued this fiscal year than last and processing time for the T visa has decreased. Another immigration benefit available to victims of trafficking is the U nonimmigrant status (commonly referred to as the U visa) for victims of certain qualifying crimes who are helping, have helped, or will help law enforcement.
Some concerns of NGOs are that some government officials misunderstood complex legal aspects of human trafficking cases, did not consistently take a victim-centered approach and/or lack critical training to provide services to victims. Other issues are a disproportionate amount of services are available to female and child victims, but not male victims; lack of investigation of potential labor trafficking cases and immigrant victims reluctance of approaching local law enforcement because of immigration enforcement.

Prevention
The US is making progress through continued work on federal anti-trafficking efforts and an increased transparency of federal agencies. The Department of State made adjustments to rules for employers regarding temporary work visas and implemented a monitoring program to ensure participant welfare.
U.S. embassies, the Department of Education, U.S. Agency for International Development etc. are all providing services that increase awareness and training on trafficking. The Department of Labor has updated its list of items produced through forced labor. There is still a lot to be done, but the US is making progress. 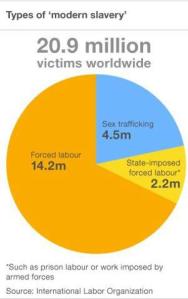 A bluntly-named awareness campaign urges young people who believe a friend is being drawn into the sex trade to drop an “F-bomb” – strong language to call attention to a serious problem.

But the “F” in this case, stands for something very positive.

The campaign with the twitter hashtag, #fbomb211 is the work of Dunn & Co. creative director Glen Hosking, who has no apologies for those who think the term is too vulgar.

“Child prostitution is vulgar. Domestic minor sex-trafficking is vulgar. A girl getting ready to turn tricks tonight? That’s vulgar. We’ve turned it upside down to where the ‘F’ stands for ‘friendship,’” said Hosking.

The campaign will try to reach teenagers through all the major social media channels – Twitter, Facebook and Instagram – because pimps are using those very same channels to target girls.

In addition to guerilla marketing events and viral videos, the agency will hand out T-shirts, stickers and even coat-check tags urging young people to take action for a friend who may not understand the danger they’re in and might resent the interference.

The website, droppingfbombs.com, dispels the stereotype of what a pimp might look like and ticks off warning signs that a girl is at risk that include dating an older guy, having lots of cash and keeping a second cellphone.

Tampa Police Sgt. Dusty Rhodes, who’s worked far too many of these cases, believes the campaign is right on target.

“Ultimately the girls are unable to get out. They feel they’re trapped in that lifestyle,” said Rhodes.

Dunn & Co. donated their creative services for the campaign while the Crisis Center of Tampa Bay’s Women in Action Group and the Florida Coalition Against Human Trafficking paid for the materials.

Crisis center specialists will be answering those 2-1-1 calls in Hillsborough County.

Copyright 2014 Scripps Media, Inc. All rights reserved. This material may not be published, broadcast, rewritten, or redistributed. 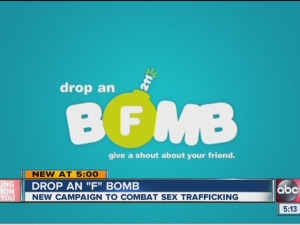