In observation of National Crime Victim’s Rights Week (NCVRW) the Domestic Violence Task Force Victim Advocacy Committee is sponsoring a day filled with fun activities and valuable resources for crime victim survivors and their families. This year’s NCVRW Program and activities was a collaborative effort, reflecting the spirit of the 2015 theme “Engaging Communities | Empowering Victims”. It highlights the importance of building partnerships throughout our communities to better address all victims’ needs and create a victim response system that is open and accessible to all survivors and victims of crime.

The Domestic Violence Task Force Victim Advocacy Committee is a collaborative group that consists of a team of professional victim advocates and community victim advocates from local law enforcement agencies and non-for-profit organizations that serve survivors of murder victims, victims of sexual assault and domestic violence, human trafficking victims, victims of child abuse and survivors of other related violent crimes. The NCVRW event will include information and resources from the task force along with a host of other agencies and organizations that serve victims in our community.

You can help engage, celebrate and honor the victim survivors in our community by participating in the NCVRW programs and events. The Program will include special events and selected topics for high school students in Ross Norton’s Recreation Center Teen Room. Teens will be introduced to anti-crime prevention resources and public awareness projects, such as the Florida Coalition Against Human Trafficking “Drop An F- Bomb Campaign”, that teaches teens that friendship is the best way to fight teen sexual exploitation, and shows them the signs of commercial sexual manipulation of children and how they can help to prevent a friend from being tricked into a life of prostitution.

Activities will also include motivational techniques and tools that help survivors cope with life experiences. Adult participants will learn martial arts and self defense tactics with Chris Sutton of Cobra Self Defense; they can take part in Yoga techniques, join a Tai Chi demonstration with Rita Hall one of the wonderful nurses from the Crisis Center of Tampa Bay, and get pampered by a chair message therapist. Mean while the children can interact with therapy dogs trained to support victims impacted by crime, take advantage of the play ground and skateboard park, and participate in therapeutic games, such as ribbon tying and arts and crafts.

Entertainment will include music by Big Dad E Sound DJ’s, line dancing with The Springtime Club, stepping by The Million Dollar Steppers, and vigorous rhythms from a quest appearance by Tapped In, Inc..

The power of partnerships launched the crime victims’ rights movement and the achievements celebrated during National Crime Victims’ Rights Week (NCVRW) each year. Families of murdered children, victims of sexual assault, drunk driving, domestic violence, and other violent crimes mobilized at the grassroots level, joining forces to demand justice for victims of crime. The National Campaign for Victims’ Rights founded by these partners led to President Ronald Reagan’s reforms on behalf of crime victims, his declaration of the first NCVRW, and the creation of the Victims of Crime Act and Crime Victims Fund, whose anniversary the victim advocate community will celebrate during its Kick Off in observation of NCVRW, on April 19th.

Pinellas County’s victim advocates honor the steps that have been made throughout the history of crime victims’ rights through community building and partnerships like The Domestic Violence Task Force Victim Advocacy Committee. The NCVRW event offers an opportunity to renew and strengthen partnerships, and to highlight the collaborative approaches that are integral to engaging communities and empowering victims.

The 2015 National Crime Victims Rights Week is being observed from April 19–25. The event is open to the public and will serve as a prelude to NCVRW and takes place on Sunday, April 19, 2015, from 1:00 – 4:00 PM, at the Ross Norton Recreation and Aquatic Complex & Extreme Sports Park, in South Clearwater, located at 1426 S Martin Luther King Jr. Avenue, Clearwater, Florida 33756.

For additional information contact The Springtime Club at 727-906-5299 or visit us on the web at http://www.springadvocate.org 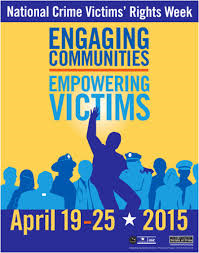